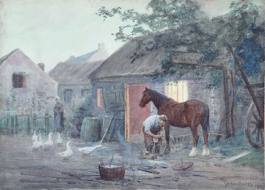 "The Blacksmith" by Gordon Coutts

The two-day event will take place on a custom-built polo field on the exclusive hotel's West Lawn and will feature teams from Buenos Aires, London and Milan as well as the UAE capital.

Special ‘Palace Rules’ have been devised for the event to ensure fast and exciting matches on pitches a third smaller than regular polo fields.

Games will be played between teams of three, with two points awarded for goals scored from outside a ‘D’ area marked on the playing surface.

Matches will begin with what organisers have dubbed a ‘Palace dash’ with riders of the fastest horse from each side racing from opposite ends of the field towards a ball in its centre.

Two matches will be played on each day with Team Abu Dhabi drawn to face Team London and Team Buenos Aires kicking off their campaign against Team Milan. The winners of those two matches will play each other in the final on the following day.

“Hopefully this is the beginning of creating a centre for polo in Abu Dhabi,” Sheikh Nahyan said before adding that “through sport we can create a better world for everybody.”

Capacity for the event has been restricted to 1,000 to guarantee the best vantage point for spectators.

Hospitality packages starting from Dh1,750 per day are available for the event while General Admission tickets, priced Dh250 per day, go on sale from Emirates Palace on November 10.