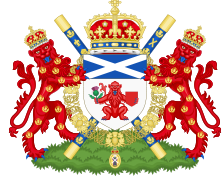 The linked websites provide a very detailed overview to the specifics of Scots Heraldy and we will only comment on a few characterisics.

Heraldry in Scotland, while broadly similar to that practised in England and elsewhere in western Europe, has its own distinctive features. Its heraldic executive is separate from that of the rest of the United Kingdom.

The bearings that may be used by the Lord Lyon King of Arms, the coat being impalable with the office holder's personal coat.

The Scottish heraldic executive is separate from that of the remainder of the United Kingdom and is vested in the Lord Lyon King of Arms.[1] The earliest reference to the Lyon, as such, dates to the reign of Robert the Bruce in 1318, although with respect to certain of his functions he is considered the successor of royal officials dating to ancient Celtic times.[2] The Lord Lyon exercises general jurisdiction over all matters armorial in Scotland and serves as a Judge of the Realm. He also decides on questions relating to family representation, pedigrees and genealogies.[1] In addition, he supervises all state, royal and public ceremonies in Scotland.[3] The Lord Lyon also asserts the right to decide who is Head of the Clan or Chief of the Family or Name,[4] although his authority to determine chiefships has been challenged.[Note 1]

In carrying out his duties, he has been assisted, in recent times, by a staff of three heralds and pursuivants along with a Lyon Clerk and Keeper of the Records.[2] The present Lyon Clerk, Elizabeth Roads MVO, who is also Snawdoun Herald, is the first woman ever to serve as an Officer of Arms in the United Kingdom.[9]

Pursuant to Chapter 47 of the Act of 1672,[10] the Lord Lyon is empowered to grant arms to "vertuous [virtuous] and well deserving persons."[11] According to Innes of Learney: "A [Scottish] coat of arms is the outward indication of nobility and arms are officially described as 'Ensigns of Nobility'. A patent of arms is . . . a Diploma of Nobility . . . ."[12] Clarifying this statement, a later writer on Scottish heraldry has noted: "Technically, a grant of arms from the Lord Lyon is a patent of nobility; the grantee is thereby 'enrolled with all nobles in the noblesse of Scotland'. This is does not constitute a peerage or any title. It is a social distinction, and has no legal privileges  ."[13]

The principal function of heraldry, whether personal or corporate, is to symbolise the identity of the owner of the armorial bearings. In Scotland the Clan, the Family, and the Name have survived as significant entities in the social organization of Scottish society.[4]

In Scottish heraldry there is no such thing as a "family coat of arms". Junior members of a family are assigned specific and relevant differences to the armorial bearings of an ancestor.[4]

Scottish heraldry operates under the proposition that all those who share the same surname are related, however distantly. Consequently, where a coat of arms for the head of a family already exists, new grants of arms to individuals with the same surname will generally be variations on those arms.[14] "[T]he salient feature of Scottish heraldry is that, as compared with England and other countries, the basic coats of arms are relatively few in number, but numerous differenced versions of each basic shield exist. The basic, or simple undifferenced arms and crest, are the property, not of the 'family', but of the 'Chief' of each clan or house …."[15]

The Lord Lyon King of Arms has a vital and continuing influence on the family organization in Scotland. Depending on the terms of the original grant, armorial bearings are succeeded to by the heir—who may be the heir male, the heir female, or the heir by tailzie (an heir nominated within the blood relationship).