"This tartan was created to commemorate the 75th birthday of J Robert Coutts, the husband of the designer. The tartan is based on the colours of the traditional Farquharson Clan tartan (Coutts being one of the septs of the Farquharson clan) but with the additional incorporation of a lighter blue to represent the sea and the sky of California, where Mr Coutts and the tartan designer reside. The addition and arrangement of four sets of grouped lines represent Mr Coutts' three children and one beloved grandchild. This tartan has been designed for an individual and his family but it is available for anyone sharing the Coutts name or who wishes to wear it. Mrs Gloria B. Coutts " 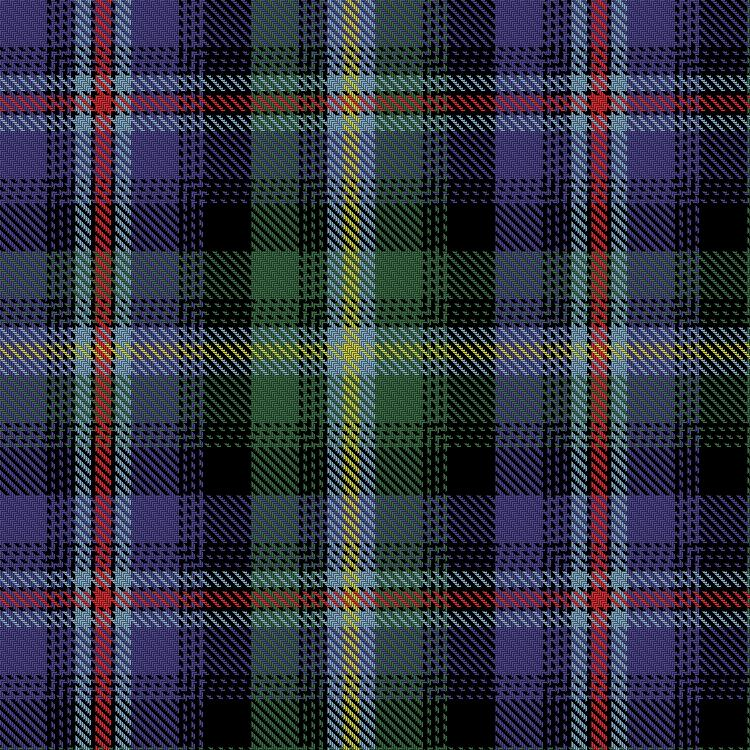 Tartan is a pattern consisting of criss-crossed horizontal and vertical bands in multiple colours. Tartans originated in woven wool, but now they are made in many other materials. Tartan is particularly associated with Scotland. Scottish kilts almost always have tartan patterns. Tartan is one of the patterns known as plaid in North America, but in Scotland, a plaid is a tartan cloth slung over the shoulder, or a blanket.

Tartan is made with alternating bands of coloured (pre-dyed) threads woven as both warp and weft at right angles to each other. The weft is woven in a simple twill, two over - two under the warp, advancing one thread each pass. This forms visible diagonal lines where different colours cross, which give the appearance of new colours blended from the original ones. The resulting blocks of colour repeat vertically and horizontally in a distinctive pattern of squares and lines known as a sett.

The Dress Act of 1746 attempted to bring the warrior clans under government control by banning the tartan and other aspects of Gaelic culture. When the law was repealed in 1782, it was no longer ordinary Highland dress, but was adopted instead as the symbolic national dress of Scotland.

Until the middle of the nineteenth century, the highland tartans were associated with regions or districts, rather than by any specific clan. This was because tartan designs were produced by local weavers for local tastes and would tend to make use of the natural dyes available in that area. The patterns were simply different regional checked-cloth patterns, where of the tartans most to one's liking - in the same way as people nowadays choose what colours and patterns they prefer in their clothing. Thus, it was not until the mid-nineteenth century that specific tartans became associated with Scottish clans or Scottish families, or simply institutions who are (or wish to be seen as) associated in some way with a Scottish heritage.[1]

It is generally stated that the most popular tartans today are the Black Watch (also known as Old Campbell, Grant Hunting, Universal, Government) and Royal Stewart.[2] Today tartan is no longer limited to textiles but is used on non-woven mediums, such as paper, plastics, packaging, and wall coverings.[3]